Leadership as it relates to Braving The Odds

Engineer Himba Cheelo (Ms.) is a Fellow of the Engineering Institution of Zambia (FEIZ). She is a holder of BSc (Hon) degree in Chemical Engineering/Applied Science from the Exeter University (1987) and a MSc degree in Combustion Science and Pollution Control from Sheffield University (1992), both attained in the United Kingdom.

Eng Himba is a mother to two daughters and a son. The eldest daughter a lawyer and her sister is a Mental Health Practitioner and their brother is in his final year at University.

She is a sister, a daughter, an aunty – all in all she is a lot of things and everything that most women are today 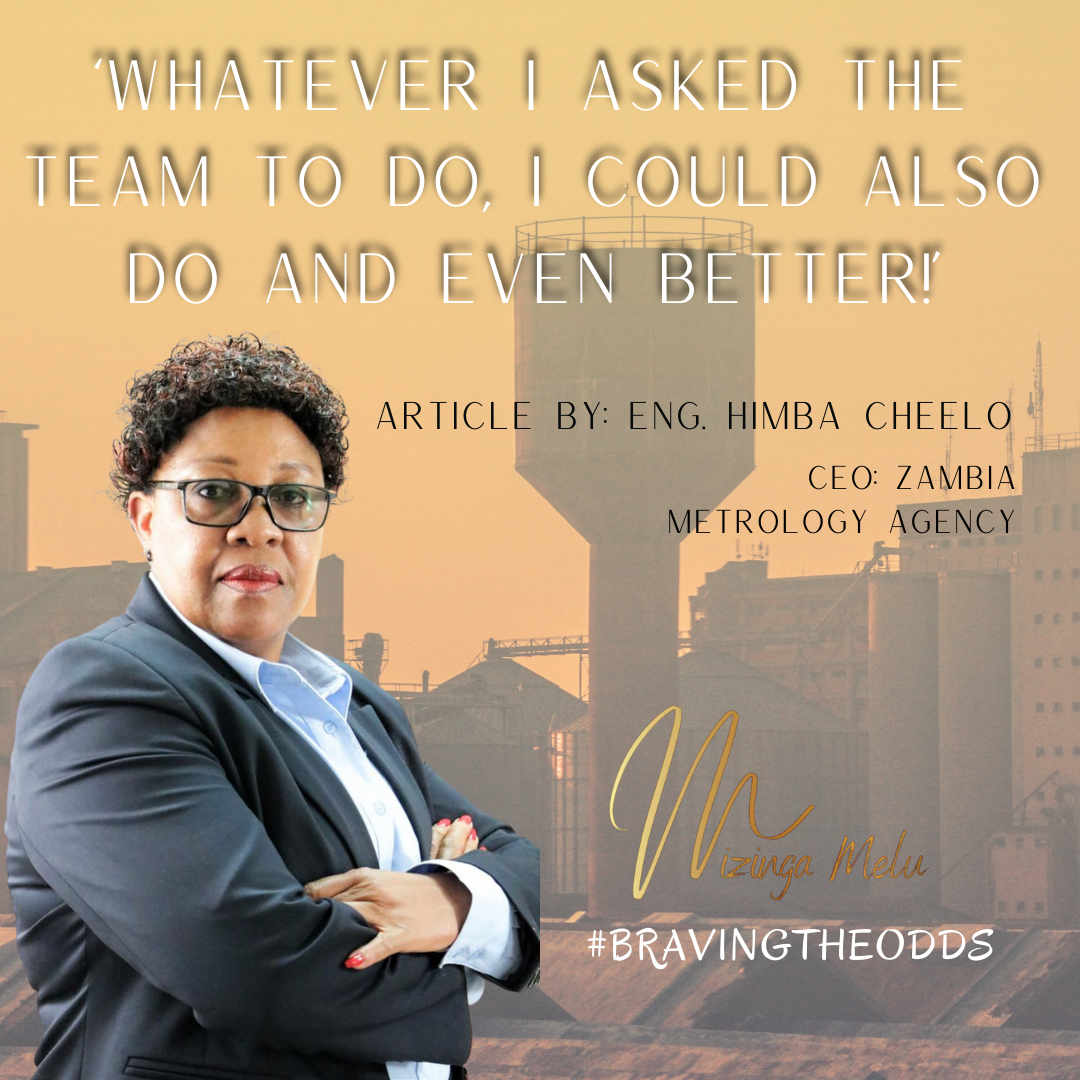 Venturing into a male dominated field

My interest and passion for science started at a very young age. Right from my primary school days, I had a natural lean towards the sciences. By the time I was entering secondary school I had already decided that I was going to pursue a career either in a Science-based field of Engineering.

Back in the day, secondary schools would hold a huge and prominent annual science fair called The Jets Fair –  JETS was designed to encourage students interested in various engineering education programs to pursue engineering. I quickly signed myself up for the program was attached to a soap-making project under a company called Rope Limited. During my time at this attachment, I was able to interact with Chemical Engineers and this was a pivotal moment for me as I established that I thoroughly enjoyed the experience (even winning the award for that year) and knew exactly what I would focus on.

So as early as Form 3 or grade 10 as it is known now, I had made up my mind that I would pursue a career in Chemical Engineering

I would like to mention that I was luckily enough to have a Father who pushed his children in the right direction in terms of education. As soon as he realized my interest in becoming an Engineer he encouraged me all the way. He told me ‘look you can do it’ and he gave me all the emotional and financial support. When it was time to leave for the university he took time off his busy work schedule and accompanied me all the way to the UK and handed me over to the family that would act as my guardians.

Return to Zambia and first appointment

After spending quite a number of years in the UK, on completion of my studies, I decided to return home. Whilst I enjoyed living in the UK and everything about it I must say the whole time I was there I had my country at the back of my mind and I traveled a lot back and forth to Zambia during my time there whenever I had free time. So when I completed what I had gone there for it was simply the ‘there’s no place like home’ factor that motivated me to return.

The male-dominated field of engineering

At the time (and to a large extent even to this day), Engineering was a male-dominated field and as expected I had to work with predominantly male engineers and clients. In the early days as the direct supervisor of a team of male engineers, I was often faced latent resistance. But I knew that if I was going to succeed in my job I had to find a way to overcame this challenge and create better synergy with my team. I used one simple rule…. ‘whatever I asked the team to do, I could also do an even better!’ I had to roll up my sleeves don on the safety boots, safety hats, safety goggles’ and drive long distances across the country. Mucking in and fiddling with components of a fuel dispenser became a way of life for me!

With time through hard work and track record started to notice that I had earned the respect from most of my peers, my team, and the clients.

I worked with Caltex Oil Zambia for a good number of years before moving on to the Energy Regulation Board. Again through hard work and perseverance, I rose through the ranks to become the Senior Engineer – Fossil Fuels. This role essentially meant that I was in charge of technical regulation of the entire petroleum sector in Zambia.

I continued with my ‘leading by example’ leadership style. The example here is all-encompassing – what does this mean? It means being completely transparent in all that I did, applying firmness where required, demonstrating that I capable of performing the so-called ‘male task’ and not only was capable but that I could do it even better than my male counterparts. Getting down and dirty to climb the mega-fuel tanks at our national fuel storage facilities, was par for course in the execution of my job.

Moving along to the present day, in my current role as CEO at the Zambia Metrology Agency, as I look back on the journey of my career my take is that the odds tend to be more ‘silent’ and are implied more than stated!

There have numerous challenges along my career path, over and above what I have managed to share here. As a female engineer, I have had to work that much harder to earn the respect and esteem from my counterparts/peers and the various stakeholders that I have served along the way. My leadership style, which is underpinned by transparency, empathy, firmness and hard work, have really helped me to overcome the odds I was faced with along the way.

It is a fact without any doubt that being female has meant that I have had to work extra harder to earn the respect that I command and deserve. Being female cannot and should never be downplayed even in this era of ‘equal opportunities’!